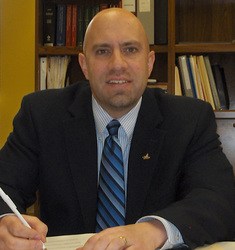 Matt Curci is in his 24th year serving as an educator in the Apollo-Ridge School District, his 8th year as Superintendent. An alumnus of Apollo-Ridge, he is proud to be part of a dedicated team in his home district and considers it a blessing to have the opportunity to serve his community. Dr. Curci is married, and he and his wife were blessed with a son and a daughter.

A graduate of Grove City College, Dr. Curci earned his Bachelor’s Degree in Mathematics. He then returned to Apollo-Ridge as a High School Math Teacher and an active participant in school events. Dr. Curci taught for 10 years and also served as a varsity coach in football, basketball, and track. He was also a sponsor for Student Council, Varsity Club, and National Honor Society. While teaching, Dr. Curci earned a Master’s Degree in Sport Science from Indiana University of Pennsylvania.

Dr. Curci began his administrative career at Apollo-Ridge by first serving as Elementary Principal. He then moved to the central office where he served as Director of Curriculum, Instruction, and Assessment and Assistant Superintendent. He earned his Doctorate in Education in Administration and Leadership at Indiana University of Pennsylvania. Dr. Curci was appointed to a second five-year term as Superintendent that began July 1, 2017.